This month, I will describe the trip made during 2019. The NSS convention was held in Cookeville, Tennessee. Our 91-year-old friend, Brad, who resides in 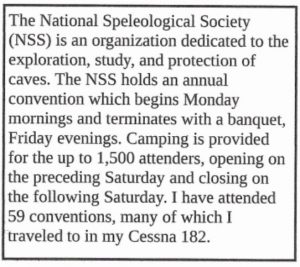 Chicago, reported his eyesight was deteriorating. We offered to take him to Gananoque, Canada (east of Kingston) where his nephew was residing. I then worked on an itinerary for the trip. We would leave on June 10th, planning to arrive at the Upper Cumberland Regional airport the next day. This would allow us to join a four-day preconvention event near Fall Creek Falls State Park. After the convention, we would fly to Gary, Indiana to meet Brad. Then on to Watertown, New York, where we would rent a car to drive to Canada. In planning the trip, I decided to limit my flying to two hops per day, as I am not nearly as young as I was 55 years ago. For intermediate stops, I considered fuel prices, instrument approaches, and overnight camping possibilities. My first planned fuel stop was at Great Bend, Kansas. I then planned to fly to the Horseshoe Bend airport, Arkansas, for fuel and overnight. From there, it was an easy 302 nm flight to my first destination. This would give us time to rent a car and drive to the preconvention event. 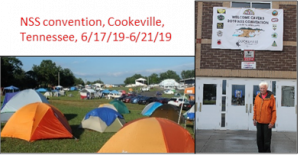 I considered the load Deb and I would be carrying (clothes, caving gear, tent, sleeping bags, air mattresses, stove, canopy, table, chairs, etc.) This would fill the luggage area and the entire back seats. I would have to make arrangements for getting most of the gear back to Colorado after the convention in order to accommodate Brad later on. I called a friend from Colorado Springs who was planning to drive to the convention. He said he would

have extra room in his van and was willing to help.

I realized my planned flight from Cookeville to Gary would take us near Taylorville, Kentucky, where our friends, Carl and Betty reside. I contacted Carl, who said we would be welcome for a visit. Carl then arranged for permission for us to land at a nearby private airpark, Willow Island (58KY,east of Louisville). 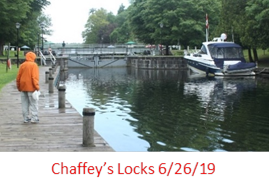 I planned to pick up Brad at Gary the next day, and then fly to Tiffin, Ohio, for overnight. Then on to Watertown, New York where we would rent a car to drive to Canada. I made reservations for an excursion on the Rideau Canal, and a boat ride on the Lift Lock at Peterborough, Ontario. I also reserved a camping spot at Peterborough.

With the planning intact, I ordered IFR enroute and sectional charts for the trip, as I use paper for a backup to my iPad. After receiving the charts, I marked them with a highlighter pen, following victor airways. I also generated spread sheets, listing the itinerary and routing.
As our departure date drew near, we used our

family room as a staging area for all the supplies we were needing to take along. We loaded the plane the day prior to departure.

On Monday, June 10th, we were on our way. After a fuel stop at Great Bend, Kansas, we flew to Horseshoe Bend, Arkansas, (population 2,587. The unattended field has one runway, 4524 x 60 feet, and self-service fuel. A short driveway led to the town’s main street. There was a small airport building with a phone number on the door. On calling, we were told we could spend the night in the building. We were informed all nearby restaurants were closed on Mondays. It was suggested our only option was to have a pizza delivered to the airport. This worked out well. It was impressive such a small town would have an airport which served us well.

As scheduled, the following day we flew to Upper Cumberland Regional airport (KSRB), located 7 miles south of Cookeville. We rented a car, loaded our gear, and drove to the preconvention camp. During our stay there, we went into two wild caves, toured Cumberland Caverns, and visited Fall Creek Falls State park.
Saturday, we drove to Cookeville, where we set up camp at the designated convention campground. The next day we took the geology field trip in chartered busses. After the five-day convention, Saturday morning, we broke camp and packed our excess gear in our Colorado Springs friend’s van. We then returned the rental car and flew to the Willow Island Airpark, where we were met by Carl. The turf runway is 2500 feet in length, ample for our 182.
The following day, we flew to Gary International (KGYY), Indiana, to meet Brad, who took the forty-one-minute train ride from Chicago. The train has a stop at the Gary airport, which makes it a very convenient meeting place. After the planned overnight stop at Tiffin, Ohio (16G), the three of us flew to Watertown, New York (KART), where we rented a car and drove to nearby Canada.

After spending an enjoyable six days in Canada, on July 1 we drove back to Watertown, NY. We left the rental car at the airport, using a drop box for the keys, as instructed. This saved us time from having to return the car to the city office. The first leg of the return flight was to Franklin, Pennsylvania (KFKL), for overnight.

The following day, after a fuel stop at Tiffin, we landed at Gary. We said good by to Brad who returned to Chicago by train. Afternoon buildups suggested we should spend the night at a nearby hotel.

The next morning, we were given a ride by the Gary FBO back to the airport. We were very pleased to discover our plane had been placed in the hangar at no extra charge, due to impending thunder storms. After a fuel stop at Washington, Iowa (KAWG), we landed at York, Nebraska (KJYR). Feeling tired, we elected to stay the night.

When we awoke the next morning, we realize the airport was undergoing a low overcast. On contacting flight service, it was determined airports to the west, including FNL were low IMC. Our only option was to stay put. By early afternoon, the overcast was starting to break up. We filed an IFR flight plan to Akron (KAKO), which ceiling had risen to above VOR approach minimums (429 feet). Once airborne, ATC informed us Greely (KGXY) had become VMC, with FNL being IMC with a thunderstorm. Our flight plan was extended to Greeley. As we approached Greeley, FNL became VMC! Thus, completing a wonderful adventure.

After thoughts;
Our trip planning allowed for possible delays, but the weather mostly cooperated, allowing our itinerary to be followed as planned. On hindsight, I could have received a forecast at York, and continued to FNL on that day. Our Colorado Springs friend met us in Denver during a club meeting, making it convenient to pick up our gear.

Imported from Canada
BBQ in September