Last week about 30 volunteers took part in the mandatory tri-annual emergency response exercise. The scenario was an airliner had slipped off the runway with about 145 passengers on board. This year they wanted to set the scene as if this was a flight coming from warm weather and this incident happened in cold weather. They needed to figure out how to keep all these passengers who were dressed in shorts and t-shirts warm in the cold weather. Who knew that Mother Nature was going to get into the act and provide a cold and rainy day for the event.

As volunteers we gathered at the fire station, signed in and got our arm bands. Each of us were “tagged” with a short description of our injuries. We were to stick to what was written on those tags as they were designed specifically for this exercise. Due to the fact that there were only 30 volunteers and they needed to account for all 145 passengers some of us got a designated number instead of an injury. My arm band said I was 50 people.

After instructions that we were to stick to the injuries on the tags were were taken to the “crash site” by Aims bus. The site was a yellow school bus with an emergency slide. A wrecked car sat on the side stuffed full of pallets represented an engine that would be set on fire.

fire to the car.

So once again we were out in the cold, literally. As mud began to cake on our shoes, the first fire truck arrived. We watched as they approached, set and began pouring water on the blazing car. Then we kicked into our “roles”. We were to be confused, sacred, disoriented and were told to get in the responders faces.

We bean to scatter across the open fields, into the way of the emergency vehicles, wandered around on the tarmac. We looked for lost family members, lost dogs, looking for phones to call loved ones. The responders tried to get us corralled to no avail. Just as a few of us were put in an area, then we would grab a volunteer and volunteer to go find someones dog or husband. As the event progressed they began to get a handle on how to contain us.

Eventually we were all triaged, loaded into ambulances, and taken to the terminal. There we were checked in and all passengers needed to be accounted for. I was in the last 6 or 7 and once they saw that I was 50 people they grinned. “Phew. We found them.”

It was a great exercise and you could tell that all agencies had a part in learning, even those that pretended to be ticketing agencies trying to get us on connecting flights. By that time being cold and wet, I ordered a flight to the Bahamas!!! 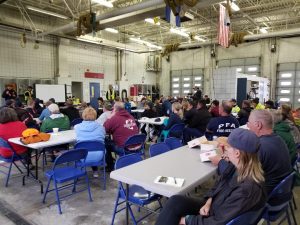 After the exercise we all returned to the fire station and we recapped the things that were good and those that might need changed. After completing an evaluation sheet we had a nice lunch.

Of course I never made it to the Bahamas!!