On September 26th we held our monthly pilots refresher meeting. Several people from several agencies took part in this meeting. 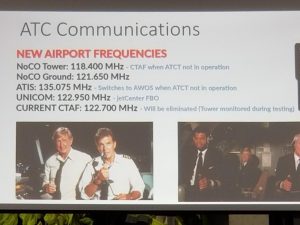 Jason Licon discussed the Master Plan describing it as a guide as to how the airport will be used for the next 20 years. It also preserves space for future needs. It was last updated in 2007. If you have any questions or concerns please contact him or go to www.flynoco.com.

There was a period for questions and answers after his presentation.

Ryan Hayes has been an airport planner for 20 years and is working closely with both the airport and the FAA in an effort to compete the Master Plan. He provided several slides as he talked about a variety of future needs as well as finances for the airport.

He stated that 1533 needed to be widened so that needed to be factored into the plan. 624 will remain open but it will not receive FAA money.

He answered questions following his presentation.

James stated that there was a feed back form and the link has been provided in the last couple of newsletters and it will continue to be in the newsletter. Please email the pilots association if you are unable to find the link.

Bill Snodgrass with the local chapter of the EAA reminded us that they are having a Young Eagles event Saturday Oct. 12th and they are expecting a good turn out.

He is also the Colorado Wing leader for Angel Flight West which is a charitable organization that provides flight for patients over long distances. They will be having a fund raiser October 5th at Metro called Run the Runway which is a 5K event.

Jason Licon brought up a couple of house keeping items. First, our badges need to be renewed by Oct 31st. Please contact them prior to that date if you are unable to make that deadline. Second, thank you for stopping at the gate and making sure that it closes before you leave the area. 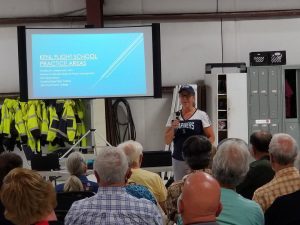 He reminded us that Oct 1st there would be a mandatory emergency exercise and that some of the areas would be coned off. Taxi way Delta from the fire station would be closed between 9:00 am and 10:00 am while there is a possibility of high energy vehicles traveling up and down that are. If you need to get in the airport, there will be staff to direct you

Air service will return beginning Nov. 21st with flights on Sunday, Monday and Thursday, Friday. Alligient has replaced all their MD 80’s so it should be a bit quieter.

This was followed by a question and answer period.

Dave Ulane gave an update on the Remote Tower timeline. He understands that it has been frustrating with all the moving dates but since this will be the first of it’s kind in the world, he sees understands the FAA wanting to get it right. He stated what a pleasure it was to work with our airport manager and the administration. According to Dave we have the best pilots around.

They are in the process of updating their aeronautical charts and airport directionals. If you spot any errors please let the know at www.colorado-aeronautics.org.

They are working closely with Bill Standefer and the Colorado Pilots Association to re-validate the preferred mountain routes. Their charts differ from the FAA as they actually charted out using diamonds for preferred routs.

The Lavita Pass AWOS is finally up and going after being burned down last year in the Spring Creek fire. 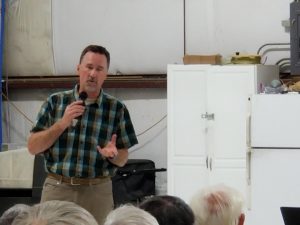 The state has an aviation plan like we are working through for our Master Plan, only they have 74 public use airports to deal with. It deals with economic output, jobs created, what tax contribution to the local community should be. That should be out in December.

CDOT reports to a 7 member aeronautical board and in December there will be an opening. If you represent a local government or airport operator and would be interested in this position please contact him and he will send you the link to apply.

Gina Gonzales said she would like us to see what we could do about getting the fire station inside the fence. She stated that Jason sent her to the ARFF working group conference. We are in Section 6 and that reaches from Colorado to Alaska. The Chief of SEA-TAC is the president of this section. There were 500 fire fighters and the response that this team did for the accident that happened here made national news. They are all so impressed by what we do that they have asked her to speak at the leadership conference in February.

She is also now the Colorado representative for all airports for the ARFF working group.

Alex Wernsman, the chief flight instructor for Aims Community College thanked us for the warm welcome. When they were trying to figure out how the airspace would work with the training and practice areas. They followed what Pueblo had done for their school. He stated that 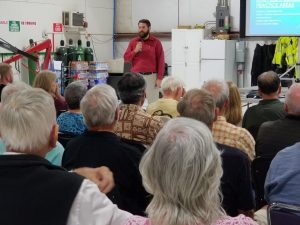 the practice areas were just that, practice, not alert areas, not military areas, and not restricted areas. It’s the same shared airspace that it has always been. He showed maps of the practice areas and stated that both the pilot and the instructor both watch for planes and that is they need to practice multi-engine they will fly 7,500.

Currently they are using CTAF frequency to announce positions and intentions. Once the tower goes operational they are looking for both the FAA and FCC to agree on a frequency for them to use.

There was a session of questions and answers.