Home / Blog / From Arrow to Airplanes

From Arrow to Airplanes

Every once in a while whether you are flying or hiking, you may run across a large concrete arrow. You immediately wonder where they came from and if they served a purpose. 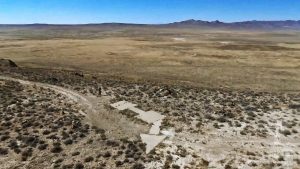 The simple answer is yes they served, and in some cases still do serve, an important service. These large concrete arrows, some as large as 70 feet long, are not landing beacons for aliens.

In the mid-19th century mail was delivered by stage coach, a feat that took 25 days over land or if it was shipped by mail, it could take months to reach California. In stepped an entrepreneurial group of men who developed the Pony Express. Over 200 relay stations stretched across Missouri, Kansas, Nebraska, Colorado, Wyoming, Utah, Nevada and California. Riders would follow the route of these relay stations trading horses every 10-15 miles. Though it was the fastest delivery system at the time, it was short lived when the Pyramid Lake War broke out between the United States and the Paiute Indians. The Pony Express never recovered from the cost of that shut down. 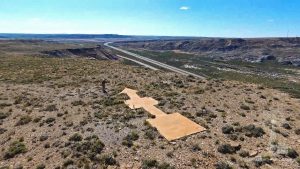 The final nail in the coffin was the transcontinental telegraph, the Pony Express ceased service just 2 days after the last line was erected in Salt Lake City.

What if you could take the basic idea of the Pony Express with designated relay stops and apply that to the new coast to coast airmail system? Back then there were no good aviation charts so pilots had to eyeball their way across the country using landmarks. This meant bad weather and night flying was pretty much out of the question.

The answer??? Yep concrete arrows, big enough to see from the air. In 1924 Congress funded a giant line of concrete markers that stretched from Rock Springs, WY to Cleveland, Ohio. The next summer it reached all the way to New York and by 1929 it crossed the entire country from sea to sea. They also had a 24” or 36” rotating beacon and in the early days they were painted Chrome Yellow. When electricity wasn’t available they used a generator and shed light on the feather end of the arrow. All arrows pointed east on the west-east airways and north on  the north-south airways. 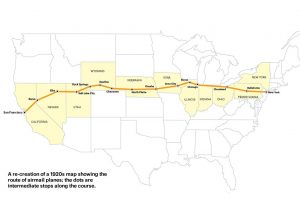 Jump ahead a few decades and we have GPS. GPS is accurate and continuous and has global capabilities. Though it was invented in 1973 it was used exclusively by the Department of Defense. The government had already launched almost a dozen satellites that could help locate its military craft on land, in the air, or on the sea.

On September 1st 1983 the Soviet Union shot down a plane. It’s military officers thought it was a spy plane, in reality it was Korean Air Lines Flight 007 and the 269 people on the plane all died.

The flight had originated in New York and carried a U.S. congressman. Though it wasn’t widely reported President Reagan immediately began pushing to speed up the timeline for civilian use of GPS stating that once the next generation came out it would be offered to the public and would be available for free.

It took more that $10 billion and over 10 years for the second version of the U.S. GPS system to come fully online but in 1995 it became available to private companies for consumer applications, though it still had some “selective availability” reserved for the military. In 2000 President Clinton got rid of the selective availability and freed the world from paper maps.

Now Global Positioning is in every airplane.

We’ve come a long way from those concrete arrows on the ground.