Severe weather is described as either an inch or greater hail and 50 knots or greater wind gusts. One old texts say ¾ inch but in recent years it was changed to 1 inch.

The life cycle of a thunder storm.

It begins as a cumulus cloud that meets with condensation. Once the down draft starts you start getting precipitation at the bottom of the cloud. So now there is both an updraft and a down draft. In a garden variety thunder storm the up draft and the down draft are right next to each other. There is a huge amount of wind sheer inside the storm, any thunder storm.

The dissipating stage is when the updraft is cut off and everything is falling. 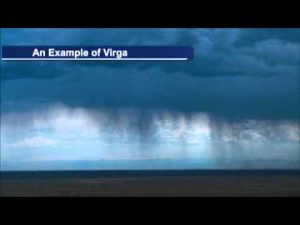 Virga is a high based thunder storm where the base is 5,000 to 6,000 feet but below you have extremely dry air.

Is there energy to support convection and if the atmosphere is capped to inhibit that convection. So a measure of convection called CAPE, Convective Available Potential Energy, is how you measure available energy to create and updraft. Most skew T’s will show CAPE which we measure in Juels per kilograms.

What happens in the summer is we get the lifting action from the mountains and the instability from that side of the ridge, but once it gets over here the energy goes away. Then once it gets over about Kansas where there is more moisture it creates thunder storms.

So that is why we end up with down dry sloping winds in Northern Colorado which don’t turn into thunder storms. It’s also why we say in mountain flying “in and out before noon” in June and July.

It’s different in the Midwest than it is here. There is a lot more moisture, lots more instability. Micro bursts are very strong down drafts. The air evaporates and cools and gets cooler and cooler and falls faster and faster out of virga which is why you never fly under a virga because it can lead go a micro burst that can be 5 or 6 thousand feet per minute down draft.

When a horizontal wind sheer goes horizontal and gets rotating, we get the updraft of a thunder storm that builds up over that and it grabs that and translates it vertically and now we have vertical rotation. You build the thunder storm and it stretches that out and makes it go faster and potentially builds a tornado. 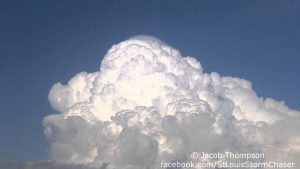 The wind sheer has to be low and gets picked up in the updraft and gets things cooking. If we don’t have wind sheer, it won’t happen.
Radar uses base reflectivity. Think about how the National Weather Service NexRad radar operates. It’s not just one beam going out and calling it quits. What we do is start ½ degree elevation and calling it quits. It makes a sweep about every 2 degrees and then another and another until it reaches 19 degrees. Then a vertical picture of what the precipitation return is. If we look at base reflectivity that is only the lower ½ degree elevation we don’t get the whole picture.

So on a building thunder storm is way up in the clouds, if you only look at the base reflectivity, you might miss that. So what we want is called composite reflectivity. That means we want to see the maximum of all the sweeps.

Dry Line is simply a dew point front and it forms with down sloping winds coming off the Rockies. The down slope coming off the Rockies gets dried out, it moves into the warm moist air of Texas, Oklahoma and sometimes Kansas. We also have to have convergence which is wind from the south east moving moisture up against the dry line – nothing happens.

The Denver Cyclone is a region of cyclonic rotation in Denver. It forms because of the Palmer Divide, the Rockies, and the Cheyenne Ridge. So if you have a wind out of the South-South east, it blows into the Denver area and wraps around the Cheyenne Ridge and down the front range and ends up as a flow from the west to the east across Denver. The Denver Cyclone is just that rotation. 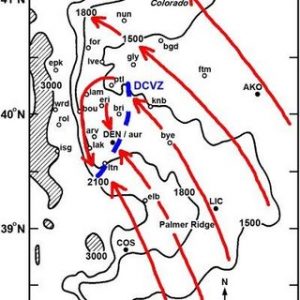 There is also something called the Denver Convergence Vorticity Zone. This is sometimes lumped into the Denver Cyclone and it’s an area of convergent winds oriented north to south just east of Denver.

Remember convergence can give us updraft necessary to start thunder storm action. So the convergence is from westerly wind and south east wind from Kansas and Oklahoma that converges around Denver and interacts with the rotation and then it moves out. That’s where we get that line of thunder storms that starts in Douglas county and follows I76 to Julesburg.

The wind out of he front range out of the north west is down sloping warm air which inhibits thunder storms. That’s why we don’t get them here as often as the do down south. It also keeps tornadoes from forming on the west side of I 25. Because the low tends to form in this area and then that moves up into Weld county. Weld county has the highest tornado count of any county in the U.S..

This was followed by questions and answers and examples of storms.