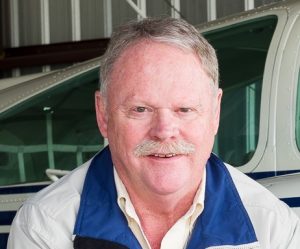 Bill has been flying almost 50 years having gotten his first certificate in 1970 at Jeffco in a brand new Cherokee 140. He started in May, soloed at 8 hours and got his certificate at 37-38 hours later that August.

When asked how he got into aviation he said one day a friend of his came up to him at work and said, “At lunch time we’re going to learn to fly.” Bill simply said OK. He was thinking about going back to school and was glad he got his certificate before doing so.

He had gone to college right after school but dropped out after a semester and got a job at Burstein-Applebee selling ham radio equipment. He has been a ham radio operator since 1965 and currently has a 40 foot tower that he uses. Ham radios play an integral part in emergencies and when the infrastructure goes down, like after a hurricane. He does contesting and enjoys both the International contests where you talk to as many people you can from Friday night to Sunday night, and the US – Canadian contest where you talk to Canadians and US operators. His station isn’t big enough to compete, but he enjoys participating none the less.

As soon as he got his certificate he got drafted and he didn’t fly much. He spent a year at Lowry in tech school, married Ann, and then they sent him to Maine, or as he puts it, “An all expenses paid honeymoon to Maine.” While in Maine he spent a year in precision measurements, calibration and repair of electronics test equipment. They calibrated everything, altimeters, thermometers, weights, measures, and volt meters. Then they came back to Lowry where he was an instructor for a year and ½ before he got out.

He then went to CU and got a degree in Electrical Engineering. At that time, they were living in Aurora working at McDonald Aircraft where he was a tech writer while going to school. They got a contract at Lowry to create a self-paced computer aided program for the class course he had been an instructor for, so they didn’t have to have instructors.

After that he went to a company in Lakewood that builds kidney dialysis equipment where he was a technician until he graduated from CU. While he was working full time and going to school ¾ time his wife decided to go to school and get a degree in business. They didn’t see each other much during that time.

After graduating he got a job at HP, starting off in marketing. He also worked in R&D for a while. He worked there until they spun off into Agilent. They then split again and after 30 years at HP/Agilent, he technically retired from Keystone even though he never worked for them.

He retired from H.P and as he says, “Once you get flying in your blood you just gotta do it.” While they were living in Aurora he told his wife she really needed to know “how to land this thing” in case anything would ever happen to him. So, he took her up and she came back with this huge smile and said she wanted to learn to fly.

While she was doing her training to get her GA license he was working on his commercial and instrument as well as his multi-engine certificate.

One of her instructors and her husband were looking for partners to go in on a 1957 Cessna 182. Shortly after they joined in partnership their partners moved to Van-Aire. Wanting to be next to their plane they moved to Van-Aire within months. There was no ramp fee and they liked having their plane in their back yard.

He got transferred with H.P. to northern California for 5 years. The Barron they now have is their present to themselves for surviving California.

When they returned to Colorado he joined the Colorado Pilots Association just as they were rewriting and updating their mountain flying course that one of their old members had been teaching for several years. Bill got involved with that and decided to get his CFI certificate. He’s now been teaching that course for almost 30 years.

Also, at that time, he joined the FAA accident prevention program which is now FAAST, FAA Safety Team. It is a volunteer position that puts on safety seminars with a goal to improve the safety of G. A.. He has been a representative for nearly 30 years.

Brian Richardson at the Flight Standards District Office (FSDO) at DIA came to him one day and said. “I wrote this course and I taught it a semester and they want to start teaching it again. Would you like to teach it?” 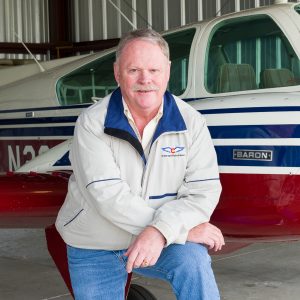 Bill said it sounded like fun, so he started teaching a course on aviation safety management and taught it a couple of semesters part-time at Aims.

This was a couple of years after he retired. So, in 2014 he went to work at Aims teaching aviation safety management.

He happened to mention to the department head that if they ever needed anyone to teach aviation weather let him know, he would love to teach it. Bill is a self-proclaimed weather geek, having taught courses for ham radio operators for severe weather operations and storm chasers.

The next semester she came to him 2 weeks after the semester had started and told him the person teaching weather wasn’t coming back and can he take over the class. Then a guy retired last year and Bill’;s department head encouraged him to apply for the full-time position which he got, so he went from part time to teaching full time. He really enjoys it and as he is fond of saying, he’s a failure at retiring.

He doesn’t get to fly as much as he wants and it bothers him from a safety aspect that some of the pilots only fly to Oskosh once a year, with little other flying to stay proficient. One of his goals is to reignite why we fly and places to fly so that pilots get more time in the cockpit. “You really have to fly to be proficient.” We forget there are places to go and do.

Remote Tower Recap
Why We Fly