I started thinking about all the weird things associated with aviation. Remember a previous article that I wrote where Michel Lotito spent two years in the 1990’s eating a Cessna 150, including the upholstered leather seats and the tires?

I got to thinking about places planes have landed. 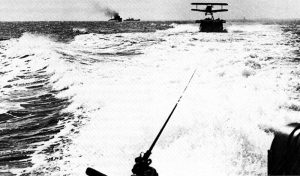 In 1918 a Royal Navy several “seaplane barges”, were used as small towed “carriers”.

The US Navy created a “sea sled” that designed as small high speed launching platform for various aircraft. Although 5,600 were to be constructed, only one made it into use. This sled was delivered to the US Navy at Boston in September 1918 and launched March of 1919.

Perhaps the only barge specifically built as an aviation vessel, this is Catapult Lighter No. 1 (AVC 1), unofficially 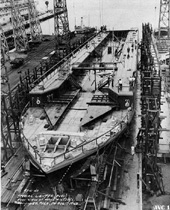 known as the “Silver Queen”. It was built to launch a very large seaplane, which was ultimately cancelled. 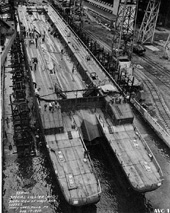 Since the seaplane could fly with a much heavier payload than it could take off with, a catapult was required. This odd 5,800 ton, 424 foot vessel, built around a single giant catapult, was built to meet the need. This view shows the stern of the vessel, where the seaplane would be hauled aboard up a ramp. The vessel was laid down on a disused shipway at Philadelphia Navy Yard on 29 May 1939. This photo was taken on launching day, 17 August 1940.

A bow view of the unusual AVC 1. This photo was taken on launching day, 17 August 1940, when the ship was 72% complete. She was launched without ceremony; the launching was probably motivated by the need to clear shipways for wartime construction, rather than a need for this experimental barge. The vessel was placed “in service” 17 December 1941, at which point experimental seaplanes were hardly a priority.

Perhaps the world’s smallest aircraft carrier. This is an Armored Troop Carrier (ATC) fitted with a helicopter deck, making it an ATC(H). These small craft were converted from landing craft (LCM). They saw extensive river time use during the war.

I’m sure there are TONS of other places that aircraft have landed but I kept it to these few for now.

Where have you landed? Let me know and we might just write an article about it.