Steve Wolf started the meeting by going over the vision statement.
It states, “The FNL Pilots Association supports general aviation at the Fort Collins-Love land airport by advocating on behalf of its local pilots in the use of development of FNL.”

It was brought to his attention that the with the new name of the airport the statement should reflect the Northern Colorado Regional airport. He put it to a vote and it passed over overwhelmingly. 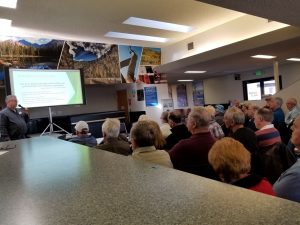 He reviewed last year and the role of the association such as participation in public meetings and promoting aviation. We hold pilot refreshers each moth as well as educational article in the newsletter and blog.

In December we held a joint Christmas party with EAA Chapter 515 where the members paid d$12.00 each with the association picked up the rest of the bill. He stated that we may look at a different venue next year in an effort to get more to attend.

The benefits you receive for your membership includes fuel discounts, newsletter, classified ads, refreshers, BBQ’s and representation before the airport commission. 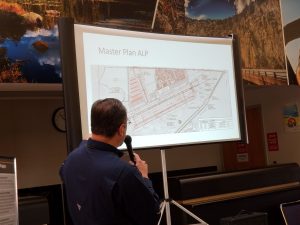 Steve mentioned the fact that this will be Howard’s last year serving as treasurer and that members have an opportunity to join the board and Howard is willing to take someone on this year to show them the ropes.

Jason Licon update us on a few of the items happening at the airport. He stated that not only had he become current on his certificate, he has passed his UAS commercial license and encouraged others to do so. He feels it is an important for all the implications it will have on the airport.

Winter operations are:
Phase 1-clear runways, taxi ways, parking lots and emergency pathways
Phase 2-connecting taxiways and the crosswind runway
Phase 3- hanger area
Phase 4- airport access roads.
He stressed the fact that if you know you need to be flying they will do everything they can to get you out.

He stated the best place to check for the updated strategic plan you can go to www.flynoco.com

The airport commission just approved a hangar on the lot just east of the firewall forward. That is about an acre of vacant land that will begin with hangers on the north side first with a possibility of another one on the south side. They want to make sure taxiway Bravo doesn’t get too crowded.

There will be a police training campus on the west side of the airport near the power substation. It was to be a tower which we no longer will need. This will be a training center for local area police with an indoor shooting range and a driving track that will take up most of the area. The benefit to this is that it is located in unused section of the property, they will have to bring in infrastructure and they will pay the airport a lease.

There were a few questions then Steve ended the meeting and invited all to stay for Nordy’s.