Steve Dillman is the pilot and has worked for Helicopter Transport Services for 3 years. He started taking lessons in the summer of 62 and paid for his lessons by hauling hay and setting irrigation pipes. He also worked at a service station at night. He worked for an air taxi outfit flying F77 Tiger on fire work in 63-64-65. by then he got drafted. After his physical he was 1A so he entered the Army and became a warrant officer helicopter pilot. So here he is at 27,000 hours later and he is still flying helicopters.

They work commercially around the world. At the time of this interview, (July), they had a couple of machines in South America. as well as working on power lines in Minnesota and Manitoba. They also have an additional 8 machines working various fire lines. 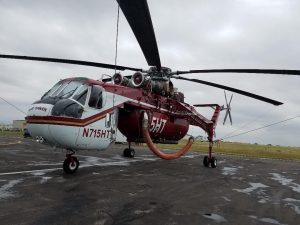 The 5HT are in big red letters, a requirement of the forest service, whom they are contracted though. They are painted so large so that fire fighters on the ground can see their numbers and know who they are talking to on the radio.

By switching the wench hook they can change from moving a piece of equipment or place a tank there. In this picture they have a tank attached. They can drop the snorkel and fill up the tank in 45 seconds. The tank can hold 2,400 gallons but they can only take what the power and altitude will allow them. Temperature and weight of the aircraft varies. So each time they dip into the water it is different.

They can use any water source as long as it is at least 2 feet deep. Anything less than that they put a hole in the water (create a whirlpool) and they can’t suck it up.

They can handle water or retardant which they get out of a portable plant which is set up near the fire. Nothing changes when they switch from water to retardant. They just stick their nozzle into the tank and suck it up.

The planes are on a phased maintenance program with a different phase every 30 hours. They carry 3 mechanics with them at all times, The trailer that goes with them is also marked with the same N number and is full of parts.

For fire work they will get an area and a lot of times a ground contact. It all varies. Sometimes it’s a lead plane that will tell you where they want the water to drop. Sometimes it’s the fire crew.

There are some fire schools put on jointly by the State Forest Department, the B.L.M. and the U.S. Forest Service. The location of the school varies from year to year.

The Sikorsky S51 has a 4,800 horse power engine running on each side with a total of 9,600 hp. It has a 72 foot rotor system. The aircraft is 88 feet long 24 feet high and 22 feet wide including landing gear. It weighs 31,00 pounds. with a max gross weight of 47,000. They have to adjust for density and 2 pilots when they travel cross country. When the do construction they can put the 3rd seat in which faces backward and a pilot can sit back there and have precise control.

The aircraft is VFR day so no night flying. The forest service gives them their hours. Standard is a 9 hour day but when fire danger goes up and daylight permits it can become a 14 hour duty day.

If they go over 14 hours they have to give them extra time off. ADSB will also be required although there is a lot of rules and regulations that don’t apply to them.

“Radar altimeters will be screaming at us all the time.” he said.  Utility helicopters work the same way. GPS has terrain warning and he said, “That damn thing is lit up all the time!  That needs to go away so you can see the rest of the data.”

The first thing they want to do is put in a lat-long, going to an airport is a secondary consideration. You ought to be able to just dial in a lat-long 1st instead of having to go though all the many, many procedures they have before you can get to the lat-long, because as soon as they are dispatched they have to be in the air in 15 minutes. They drop the ropes, drop the snorkel and go. While they are dialing and punching and dialing and punching, the fire is racing up the hill.

He has flown years and years and never gone to an airport. They trailer helicopters from job to job and have flown thousands of miles without seeing an airport. 90% of his flying time has been utility work and didn’t do a log landing.

They keep the same crew, 3 mechanics and 1 fuel truck driver. They burn up to 500 gallons of fuel an hour. The FAA wants to have procedures for IFR, basically they are supposed to get up and get in the system someplace and make an instrument approach. First of all they do not have the equipment on board due to the weight. Then they don’t have enough fuel to go anywhere, They have enough fuel to go 10 miles away from their fuel source. Some times 10 miles is a LONG way!

His crew chief Mike Sustaire is part of the maintenance crew and follows him around and ferry’s them when they need it. He also is in charge of starting the accessory drive that turns the generator for auxiliary power so they can have hydraulics which then starts the engine. He has been doing this for 20 years. He worked at United as a mechanic. He loves the tight knit community that helicopters have.