At the beginning of the pilot refresher meeting on September 27, Brian Richardson and Eric Thomas of the FAA presented The Flying School chief pilot James (Jay) Turnbull with the prestigious Wright Brothers Master Pilot award.  This is presented to pilots with fifty years or more of civil and military flying experience.  Here is Jay’s biography as related by Brian.

James Ellsworth “Jay” Turnbull was nineteen years old and fresh out of High School when he made his first solo flight on Wednesday, July 27, 1966, flying a Beech 23 Musketeer at Addison Airport, just North of Dallas, Texas.

Jay went on to earn his Private Pilot Certificate in February 1967. Later that same year Jay started at Embry Riddle Aeronautical University where he’d go on to earn his Bachelor of Science degree in Aviation Management.

In 1970, Jay entered Naval Aviation Officer Candidate School with the intention of becoming a military pilot. Unfortunately, mid-way through initial training he was unable to pass the stringent eye exam, so he then elected to transfer into navigator training. For the next five years, he crewed F-4 “Phantoms”, completing two cruises on the U.S.S. Saratoga. Jay also spent time on shore duty at Naval Air Station Key West. In his spare time, being the only civilian rated pilot in his squadron, he would rent a Cessna 172 and take squadron mates flying.

Following discharge from active duty, Jay earned his Commercial certificate and Instrument rating, and then took a sales job with Ryan Stormscopes. Not long after this, Jay started a Part 135 on-demand charter service out of Nashville, TN, mostly carrying automotive parts to manufacturing facilities in Detroit and Rochester, NY. With a downturn in the economy, Jay decided to move into other areas of interest.

Over the next several decades, Jay continued to fly and keep himself current while operating a landscaping business and doing a short stint teaching at the University of Nebraska. During this time, he also became a Certificated Flight Instructor. Since 2016, he has been serving as the chief pilot/manager at The Flying School in Loveland.

During the first fifty years of his aviation career James Turnbull has accumulated more than 3,000 hours of flying time. He holds Flight Instructor Certificates for both Airplane Single Engine and Instrument Airplane.

Jay’s wife Karen received a stickpin in recognition of her support to Jay’s aviation career.  In Jay’s acceptance comments, he mentioned that he has worked extensively with Brian, who is the Denver FSDO FAA Safety Team Coordinator, and that the “kinder, gentler FAA” goal appears to be modeled after Brian. 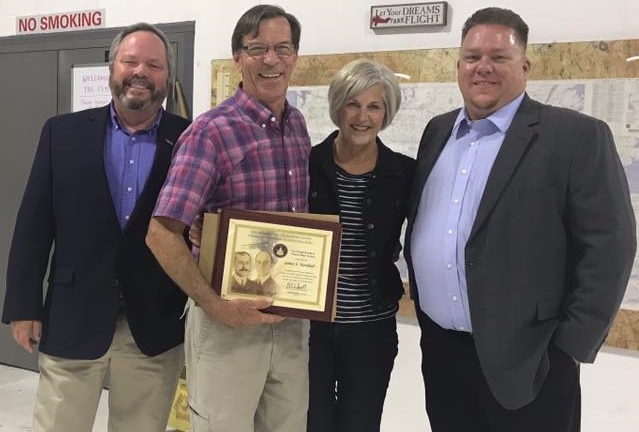