General Aviation Safety
The latest Nall Report, using 2015 data, has been released. It shows that we’re flying more with fewer fatalities. The accident rate has declined to 0.84 per 100,000 hours flown. However, the accident rate from pilot related causes subbornly remains at 74%.

FAA Reauthorization
Long-term FAA reauthorization passed the House (HR302) the day before, on September 26. The Senate is expected to pass it when it comes up for a vote there. The great news is that air traffic control privatization is not a part of the bill. Warren thanked FNL Pilots Association for adding our association’s name to the almost 200 aviation organizations that opposed and ultimately defeated privatization.

BasicMed / Rusty Pilots Update
BasicMed is now being used as a Third Class Medical alternative by 40,000 pilots, and 5,000 pilots who weren’t current have taken advantage of AOPA Rusty Pilot seminars to get back into the air. The Bahamas allow flight under BasicMed, but Canada and Mexico still don’t. Warren admitted that international adoption is proving difficult to accomplish.

FBO Pricing and Airports Watch List
AOPA is fighting unreasonable FBO fees, and is maintaining a “watch list” of the airports around the country for which AOPA is receiving the most complaints. The Northwest Mountain Region has had six airports on the list: Rocky Mountain Metro (BJC), Casper (CPR), Spokane (GEG), Sun Valley (SUN), Jackson Hole (JAC), and Heber City (HCR). Recently, BJC and CPR addressed their issues and were removed from the list. Even though we have a GA-friendly FBO at FNL, Warren emphasized that this issue is important to us. For example, if we’re flying to Casper we don’t have any convenient alternatives to CPR.

Airport Master Plan Updates
Airports are required to update their master plans approximately every ten years. FNL last updated our master plan in 2007, and just started the update process again. We expect it to be complete January 2020. Warren described the FAA requirements, including adherence to FAA standards, the airport layout plan, environmental conformance, funding and construction timelines (to help FAA plan their future grant programs), and public input. He encouraged us to be invested in this update process, because nothing is developed on the airport without first being in the master plan. I will keep our membership aware of master plan progress and opportunities for input over the next months.

Airport Rules and Standards
Warren discussed local airport rules and standards. Airports need to be managed in certain ways to be eligible for FAA grant assurances, including having minimum standards (such as those our airport has for any FBO to operate on the airport), standard reversionary lease clauses, and rules and regulations (such as FNL’s hangar policy requiring aviation use).

Metroplex
Warren let us know that FAA’s Denver Metroplex plan (which defines how airliners move through the airspace between airports as efficiently as possible, sometimes to the detriment of other airspace users) has gone back to the drawing board, with a new draft due next April. The prior plan had southbound business jets to Centennial Airport (APA) flying between FNL and Greeley (GXY) at 9,000′ MSL, which in addition to being inefficient for jet engines would route them right through our practice areas. FAA will hold public workshops on their revised plan in April and May, with implementation scheduled for March 2020.

Airport Support Network
The AOPA Airport Support Network (ASN), which acts as the eyes and ears for AOPA for any local issues that arise, needs volunteers at a few key Colorado airports: Colorado Springs (COS), Colorado Springs East (CO49), Fort Morgan (FMM), and Kit Carson County (ITR). If you know of pilots at any of these four airports that want to volunteer, let me know (I’m our airport’s ASN volunteer).

David Ulane, Colorado Division of Aeronautics
Dave directs a small eight-person department of the Colorado Department of Transportation. His department is not overseen by the DOT, but by a seven-person board appointed by the Governor (General Aviation has a seat on the board, represented by former Colorado Pilots Association President Ann Beardall).

Each airport receives back 67% of the aviation taxes they generate. Only 3% of division revenue is used for running the division, with the remaining 30% used for aviation grants and statewide initiatives. None of our aviation taxes go to the Colorado general fund; it’s all spent on aviation.

Grant Program
Under Dave’s leadership, the division returned to health earlier this year from a multi-million dollar hole dug by fiscal mismanagement. They awarded 26 grants in fiscal year 2018 worth $1.6 million. Along with local matches of $3.5 million and federal matches of $51.5 million, this resulted in $56.6 million of capital improvement money spent at Colorado airports. Now that the division is out of debt, Dave anticipates awarding over $6 million in grant money in fiscal year 2019.

Mountain AWOS
The division maintains a network of twelve mountain AWOS stations , with a thirteenth at Dakota Hill in test mode and coming soon.

Remote Tower
Our remote tower project has its own website with project status and videos. The division has paid $8.8 million for the project, and is coordinating with FAA. Dave is glad to see actual construction happening after years of this being just an idea on paper.

Jason Licon, Airport Director
Like the Division of Aeronautics, Jason shared that our airport is managed by a small team: five people, along with two vacancies. Their contact information is available here.

Dave’s remote tower update was a great segue into Jason’s portion of the Town Hall. Jason continued the update on the remote tower project.

Remote Tower
The camera masts and associated equipment are installed (the ramp floodlight array near the center camera mast will be lowered about 20ft to avoid shining directly into the cameras). The FAA facility in our modular building (where Greenride was located) is about 95% remodeled, as are all the equipment interconnections.

Here’s a view of the interior of the modular as of Thursday afternoon: 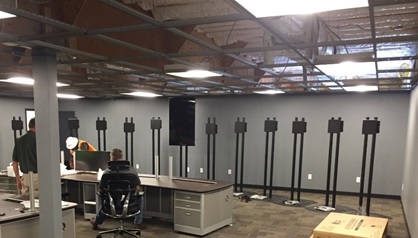 The infrastructure necessary for data gathering and controller familiarization is scheduled to be completed by October 10. Additional work, such as “shout lines” to Denver Approach and moving the AWOS system from the jetCenter hangar to the FAA facility, will continue. The preliminary testing begins October 16.

We’ll be able to schedule site visits during off testing days in October and November. Contact James Hays if you’re interested in a tour.

Phase 2 is scheduled to begin in December 2019. At this point, the remote tower will control 100% of traffic and the mobile tower will be removed. FAA will continue to collect and analyze data. The last six months of 2020, Phase 3 is where the FAA finalizes the testing and certifies the remote tower.

We will have four access points to our movement area (that is, the portion of the surface controlled by ATC), as shown here: 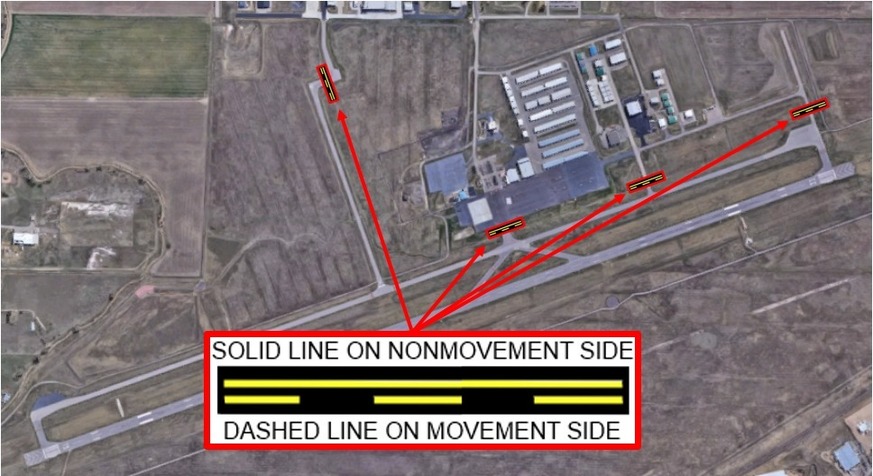 Badges
Our annual badge renewal is underway. About half of badge holders have renewed so far. 2018 badges will stop working the access gates at the end of October.

Hangar use policy
Jason reported 265 based aircraft and 213 individual hangars. FAA policy (and FNL policy as well, so that we continue to qualify for federal grants) requires the majority of a hangar to be used to store an airworthy aircraft or one in the active process of being constructed. FAA can and will audit airports for hangar use compliance.  Our airport staff is collecting data on compliance in both public and private hangars.

ILS
Our ILS went out of spec in August, and FAA repaired it. But before the ILS could be flight-checked, our planned replacement ILS equipment arrived, so it never went back online. FAA is currently hard at work installing our new ILS system and should have it operational by mid-October.