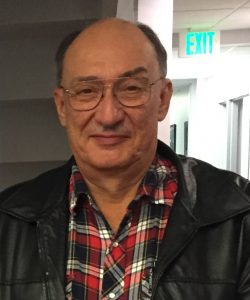 Jer/ had his first airplane ride on his 7th birthday. The neighbor was taking his 13 year old son to the airport and invited Jer/ to go along. So he and his dad took a 15 minute flight in a Piper Pacer. “It was the neatest thing he had ever done!” he says excitedly. From that point on he knew he wanted to be a pilot.

Jer/ was born in Antigo, WI., to parochial school teachers. Not only was his dad the principal, he also taught 7th and 8th and his mom taught 1st and 2nd. When Jer/ was 10, they moved to Greeley, CO., where he attended University High School, College Prep, Math and Science. When he was a junior he found out he needed a year of foreign language to graduate. He really didn’t want to take a foreign language so after some creative thinking the school counselor told him he could take a year of Fortran, which later UNC also counted as a foreign language. His University Transcript reads: Foreign Languages: Fortran, COBOL.

It was no surprise that at 17 he was writing computer programs. As a high school computer student he was either working, going to school or hanging out at the computer center at UNC where they thought he was a college student and offered him a job as an assistant computer operator for the 4-midnight shift. He also learned accounts receivable, accounts payable, wrote and signed checks for the University and maintained student records. At this time he was known as Jerry. One night his boss got in a hurry while writing the evening’s assignments, it looked like he wrote “Jer/”. One of his buddies came in, read it and said “Oh, Jerslash”… and the name stuck, especially since they had another person called “Gerry” in the lab, same pronunciation, different spelling, so Jerry became “Jerslash”. It was and is direct application of… uniqueness theory. I’ve never met another person called “Jerslash”.

He graduated from UNC with a BA in math, minor in physics, and chemistry, with an emphasis in nursing majors. By the time he graduated at 21 he was a journeyman level computer programmer,
with several languages: COBOL, FORTRAN, ASSEMBLY, PL/1, ALGOL, SNOBOL.

Jer/ graduated June 6, 1974 and that following Monday he went to work for the State of Wyoming as a programmer/analyst. The State does not pay overtime, nor accrue comp-time and you couldn’t volunteer your time so you had to leave the office after 8 hours. He was used to going to school all day and working nights plus homework. After being at work for about 3 months a friend suggested to him that he had always wanted to learn to fly. It was only an 8 block walk from their office in the Wyoming State Capitol Building to the Cheyenne airport, so off they went during lunch. Interestingly Jer/ signed up for classes, his friend didn’t. Jer/ is a pilot and his friend still is not. At that time ground school was independent study using a cassette player, film strips, slide shows, and text books. Within 6 months he had his FAA Private Pilot Certificate. Under part 141 you could complete your ticket at 35 hours. So at 35 hours he was ready to take his check ride, however, he was 2.2 hours short on cross country time. He got signed-off for the cross country and took and passed his FAA Private Pilot Airplane checkride at 37.2 hours total time.

So he worked, studied and went square dancing, where he met his wife. Who, interestingly enough is a degreed, registered nurse, who also graduated from UNC. Jer/ and his wife, Mary live in Fort Collins. 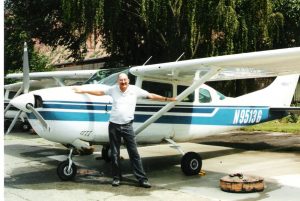 I asked him how he went from airplanes to gliders. He explained that in Cheyenne he had just gotten his Private and bought a share in a Beechcraft Musketeer. As he was doing his night checkout, the first landing you do without a landing light. The next landing you do without panel light as if you had some kind of failure. Both of those went well and he’s ready to land and put the plane away. He reached down and flipped on all the light switches and the generator exploded, killing the electrical system and the magnetos. He landed engine out, took it to maintenance where they replaced the generator and the magnetos. Three weeks later, continuing the night checkout, the same thing happened. Here he was at 21 years old, with 75 hours total time, with 2 catastrophic engine failures in the pattern, at night, at Cheyenne. That’s when he decided to get a glider rating. He kept flying and gliding and eventually the gliderport owner asked him to become a commercial glider pilot so he could give rides. He did. Then the guy asked him to become a commercial airplane pilot so he could tow gliders which he also did. Following that, he was asked to get his CFI Glider… so Jer/ had his CFI glider before his CFI Airplane.

During a conversation with his airplane instructor, Jer/ discovered CAP. You have to pay for your CAP training, but the instruction is free. It sounded like a good deal to him. Besides they flew larger airplanes than he had been. He learned in a Cessna 152, transitioned to a 172 and CAP was flying Cessna 182s. So here he is, a 100 hour private pilot flying in a 182 with a constant prop speed and 230 horse power. He now has over 9,000 hours, 1,000 in gliders, with 3,000 hours searching in the Colorado Rocky Mountains and knows much of the mountains in Colorado close up and personal, from the air.

After 4 years in the wind in Cheyenne, he moved to Fort Collins and began working at Teledyne Water Pik. He worked there 4 years before going to Hewlett-Packard, who had recently branched out into computers. One of Jer/’s hobbies is electronics. He started early, fixing TVs at 12 years old. That was a plus when he interviewed at HP.

HP is very supportive of community service so if he kept his work caught up, the company supported his time and he could be absent from work for up to 3 days. Success! He could do CAP search and rescue flying and still get paid!

While still at HP he looked for more adventure flying beyond Colorado so he and a friend went to Idaho and trained in Idaho Backcountry flying. They did that as a team for 3 years until the lady that ran the school asked him to teach with her in Idaho, which he did for a few years.

Jer/ started in computers as a senior in High school at 17 years old and retired 43 years later still in computers.

He has a Commercial Drivers license (CDL), Ham radio license: N0FZD Extra Class and serves as an Aviation Safety Counselor for the FAA as a FAASTeam member. He is currently part of the Civil Air Patrol, Thompson Valley Composite Squadron, a past Squadron and Group Commander. He doesn’t want to be Wing Commander because it would cut back on his flying. His stated goal is to fly on average, an hour a day for the year. That doesn’t always happen with Colorado’s weather but he tries to make up for it on the days when the weather is good. He averages about 300 hours a year.

Some people spend tens of thousands of dollars for therapy. Jer/ flies for therapy. He has attended the EAA Oshkosh fly-in 38 times and the EAA Sun-N-Fun fly-in 28 times. His wife will tell him to go to the airport when he is moody or she does not want him around the house.

Jer/’s favorite saying is:
“A busy person has time for what he takes time for. If it is
important to YOU, YOU will find a way to accomplish it. If it
is not that important to YOU, there is no reason to attempt to
fool yourself or anyone else about what is important to you”. — Jer/ Eberhard

His favorite book is: “Stranger in a Strange Land”, by Robert Heinlein, the unabridged version, released in 1996.