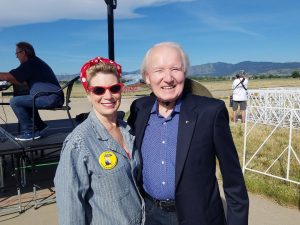 When Vance Brand was 4 or 5 he took his first flight in an old Ford Trimotor, taking off from a stubble field. He smiled as he said, “Probably half of you don’t even know what that is. Things like that make an impression on a young kid, you know.” His manor was soft and gentle, always a smile hidden deep within his eyes.

He was born in Longmont in 1931 and was active in the Boys Scouts of America earning the second highest rank of Life Scout. After graduating from Longmont High School he attended the University of Boulder where he received a B.S. in business returning after his service to earn a B.S. in aeronautical engineering.

In 1953 he joined the United States Marine Corps starting out as a ground officer, assigned to Cherry Point, North Carolina in the early days of aviation.

“Back then the jets were Saber Jets, which was the Naval version of the F-86, called the FJ.” he explained. “Every day I would have breakfast and watch the planes and think, “Wouldn’t that be fun?” He quickly saw flight as a professional and personal goal in his life.

As a commissioned  Naval Aviation officer in the United States Marine Corps, his military assignments included a 15-month tour in Japan as a jet fighter pilot. Following his release from active duty he continued service in the U.S. Marine Forces Reserve and Air National Guard jet fighter squadrons until 1966.

After he obtained a degree in Aeronautical Engineering he was employed as a civilian by the Lockheed Aircraft Corporation from 1960 to 1966, he worked initially as a flight test engineer on the Navy’s P3A aircraft. In 1963, Brand graduated from the U.S. Naval Test Pilot School and was assigned as an experimental test pilot on Canadian and German F-104 programs for Lockheed at Palmdale, CA. During this period, Brand earned a master’s degree in business administration from UCLA in 1964. Brand later worked at the West German F-104G Flight Test Center at Istres, France. 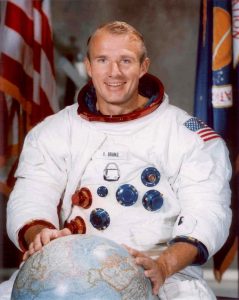 It was while he was in France he came across a small notice in Aviation Week looking for applicants for astronauts. He put in his paperwork and came back state side twice for physical and other exams. In 1966 he lucked out and got into the space program. “I was the 50th person to join; now there are hundreds.” he proudly states.

He knew, as in all things in the beginnings of aviation, there was a risk. In fact, John Glenn’s first lift off had about a 70% chance of success.

Vance Brand made his first space flight on July 15 1975 as Apollo command module pilot on the Apollo-Soyuz Test Project Mission making a historic meeting in space between American astronauts and Soviet cosmonauts. The linkup tested a unique new docking system and demonstrated international cooperation in space. The mission almost ended in disaster when, during the final stages of the mission, the crew was exposed to near fatal amounts of nitrogen-tetroxide gas. The reaction control system had been inadvertently left on during the descent, poisoning the crew as they splashed down in the Pacific ocean near Hawaii, requiring several weeks of hospitalization in Hawaii.

Brand was Commander of Space Shuttle Columbia for the first fully operational flight of the Space shuttle program.

One of the 19 astronauts selected by NASA in April 1966, he was initially a crew member in the thermal vacuum chamber testing of the prototype Command Module and was support crewman on Apollo 8 and 13. Later he was backup Command Module Pilot for Apollo 15 and was set to be named to the prime crew of Apollo 18 before that mission was canceled. He was backup Commander for Skylabs 3 and 4. When Skylab 3 had problems with it’s Reaction Control System, he was put on standby to command a rescue mission. However it was deemed that as rescue was not necessary.

As an astronaut he held management positions relating to spacecraft development, flight safety and mission operations. He flew 4 space missions, Apollo-Soyuz, STS-5, STS-41B and STS 35. He has logged 746 hours in space and commanded 3 missions. He was the only Apollo era astronaut to pilot the Space shuttle. 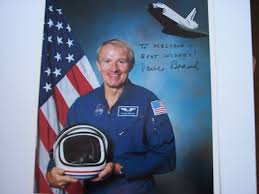 “Getting into aviation was purely a decision based on emotions,” he smiled as he explained, “It is something I have loved and never regretted.” He counts his life as one of pure luck stating he is the luckiest man alive and both proud and humble that an airport bears his name.

As we walked and talked he would occasionally stop, bend down and talk to a youngster and ask if they wanted to become a pilot when they grew up. He never missed an opportunity to encourage them to follow their dreams. Even when he asked a young girl if she wanted to grow up be a pilot and she flatly stated “No.”
“What do you want to be when you grow up?” he asked, eyebrows drawn.
“I want to be a paleontologist.” He held her hand gently and stated, “Follow your dreams what ever they are.”

The latest on ADS-B
Bob Bunderson