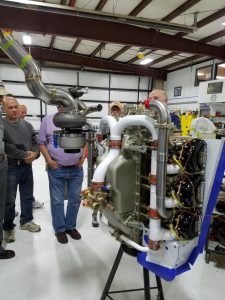 Larry started in aviation when CSU had a flying club and he bought his own airplane. In fact he bought the airplane right out of this hanger. So in 45 years he hasn’t gone very far.

An example is a customer had done some work to his own airplane and didn’t tell them and they didn’t happen to catch the problem either but the gear handle was in the up position after he worked on the airplane. He went to take off and of course before he got to flying speed he got up enough to be off the spot switch and the gear comes up. That totaled the airplane. No body got hurt but it’s a great example to let some one know you worked on it.

There is a ton of stuff you can do to the airplane. There is a lot of things that some of you do that you’re not supposed to do. So in the end it really helps if they know what you are or have done to the airplane especially if you come in with a squawk or something like that.

So let’s talk about annuals and some of the things that they can lead to. When winter time comes around they generally put in 15/50 multi-weight in. In the summer time they change to a heavier oil. It doesn’t make too much of a difference except it keeps the engine cool. Every summer, especially when it gets above 90 degrees, every body comes in and says my oil temperature is almost red-line!

Some of the things that pilots can do to help with that is to do step climbs, and that type of thing. Run it a little bit richer when you’re climbing. Cowl flaps open. Batteries go bad when they sit all winter, The cold zaps them as well as high heat. 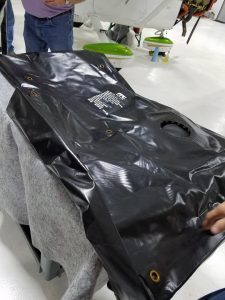 Recently they had a Bonanza in for an annual and compression checks are something they regularly do. It had really low compression. He showed the exhaust valve and the back of it had gotten real warm. The pilot had run it too lean. It’s about a $1,500 to $2,000 fix for just the 1 valve. Multiply that by 5 more and you can see how much it’s going to cost because your not burning some fuel.

They have been maintaining an airplane for about 25 years at least. Twenty years ago they put in a factory re-manned engine. It has about 1,500 hours on it. So he came up for an annual this year and talked about maybe next year getting an engine. Turns out there was a crack in his exhaust stack and the insides of the muffler were gone so they needed to take this stack off and get it replaced. We’ve never had any cylinders off that engine in 1,500 hours and 20 years so you can imagine how tight the nuts and things were. Once they took it off the studs broke off. The style of studs that you just can’t unscrew and screw another one in. So it was easier to take the cylinder out and take it to the cylinder shop and tell them to put 2 new studs in the cylinder for us. Once the cylinder was off they look inside the engine and the lifters to see if there is anything going on. It just happened to be that when they took the lifters off, ( the #1 cylinder) and they could tell one was not normal.

There was no metal coming in the filter that was showing up by the visible eye. Oil samples were checking OK so this had just recently happened. It probably stopped rotating and got a nick in it.

Normally Bonanza A36’s don’t climb that well so he decided he wanted to go higher. They decided to modify the engine when they gave it an over haul. They decided to make it turbo. So his point was, 1 cracked exhaust led to a new engine and $130,000.

He then took questions from the audience.