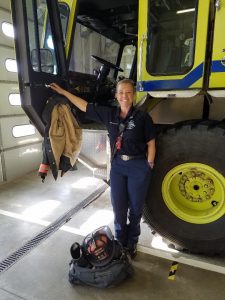 Gina grew up in Golden and got her Bachelor’s degree in Animal Science from CSU so she is no stranger to Northern Colorado. She met her husband, Frank, while attending CSU, and he was drafted to the Detroit Tigers organization in 1989. They traveled all over the world, and calculated they moved over 30 times in 7 years and lived in 7 states and 5 countries. Frank also played winter ball in Venezuela, Mexico, Puerto Rico, Taiwan, and Canada. When their oldest son turned 6 and started Kindergarten, they calculated that he had probably watched over 900 professional baseball games. They chose Ft. Collins to make their “home base” and Gina went back to her alma mater as a veterinary specialist technician at CSU. Her husband continued to play ball for a few years and actually coached at CSU for the club team for 7 years and took them to 7 National Club Baseball Championships.

Frank currently works for the Colorado Rockies Baseball organization as a team supervisor in Single-A. They have two sons, Marco and Alex, daughter-in-law Monica, and two dogs, Yogi and Mickey. Marco pitches for the Seattle Mariners and Alex is a sophomore catcher at Scottsdale Community College.

Gina’s “first” career was working as a veterinary technician for 20 years, with ten of those at the CSU Veterinary 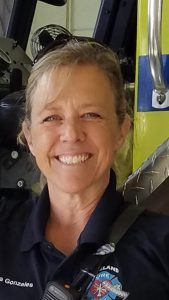 Teaching Hospital, where she specialized in the emergency & critical care of large animals. Trained to the technician level in Technical Animal Rescue since 2003, in 2008 she was invited to be the animal rescue specialist within the LFRA Special Operations Team. She became hooked on the fire service, and has been a career firefighter ever since.

Gina was also intimately involved with the development of Larimer County’s disaster response plan and animal response team DART (Disaster Animal Response Team), which has been put into action a few times already (High Park Fire, Big Thompson Flood, etc). Technical Animal Rescue training is now a standard in the NFPA (National Fire Protection Association), in which Gina has been able to train fire departments as well as animal groups.

For many years, Gina has worked out of LFRA Fire Station 6 on McWhinney. Engine 6 has a UNICOM radio and can talk directly to pilots. A few years ago they were responding to an in-flight emergency. At the time she wasn’t ARFF trained, and she white knuckled the fire truck to FNL all the while hoping they didn’t realize how scared she felt. By the time they arrived the plane landed safely. She took it upon herself to know more about ARFF, so when a position came open for the ARFF team she offered to be part of it. Then when the position at the airport came up she gladly put in for it and loves it!

In January she had just put the ARFF truck away when Larry came barreling through the bay yelling “mid-air collision”.

What was nice coming from station 6 was that is is close to I25, she had lots of experience with motor vehicle accidents. So when she pulled up she took a deep breath and thought to herself, “Gina, this is just a giant car crash.”

“Quite honestly,” she said, “it was the best thing that could have happened. It showed me where I could make a difference with our fire response.”

Gina has done training with the local mutual aid units, Poudre Fire Authority, Windsor-Severance Fire, and Thompson Valley EMS. Although they are not ARFF certified, they will respond to airport emergencies. There are times that firefighters from these mutual aid units have never even stepped foot on the airport property. Gina has taken it upon herself to help them be familiar with the airport, aircraft construction, and feel comfortable being here.

An aircraft fire is a fire with a lot of fuel, but still it’s a fire, and firefighters are excellent at that! Gina, Jason and Sean visited the FBO where she took photos of various planes and has included them in her training program to teach shut off procedures on each aircraft fuel and where to cut or not cut if an extrication is needed.

The closest fire station to airport property is LFRA Station 6, about 4.4 miles away. Response time is precious. Do not hesitate to call 911. Fire staff would much rather be en route to assist, than get called too late and be behind the 8-ball. So if your gut is telling you it could be an emergency, call immediately and get the troops coming.

When you call 911, the dispatchers need to know a few things.
1. What you think the problem is.
2. Are you in the air, or on the ground.
3. How much fuel is on board. Give an estimate in gallons if you can.
4. How many souls on board.
5. Location, location, location! Exactly where are you? Seconds count, and if your description takes us on the wrong route, it could be disastrous.

Gina sends LFRA a weekly update on what’s going on with the airport and any issues with the trucks. With all of the construction and the remote tower, this area of Loveland will only continue to grow. LFRA is committed to protect life and property of the community they serve. Let them know anything they can do to help.