Paul Stoecker, Rick Turley, and I took advantage of Operation Raincheck to visit Denver Air Route Traffic Control Center (ARTCC) on April 7. This event popped up in email just five days prior, as opposed to the two weeks’ notice we usually get. They had room for only fifteen visitors, and I signed up and took the 13th slot. 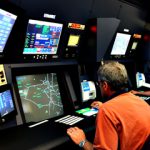 Paul visited Denver Center a couple of decades ago, and noticed a lot of equipment modernization since then. The stations consist of multiple flat screen displays, with the front center display showing the traditional radar screen. The data shown there is synthesized from multiple radar sites and ADS-B ground stations.  We were impressed with how well the system has integrated ADS-B data (only 90 more weeks until the January 2020 deadline).

We spent our first 45 minutes attending a slide presentation where we learned about Denver Center’s history and procedures. ZDV, as Denver ARTCC is known, has over 400 employees, including about 285 air traffic controllers, providing 24/7 service to parts of nine states. The employee mix also includes Tech Ops, which keeps all the equipment running (including the remote radar and communications sites), and an integrated National Weather Service office. We were surprised to learn that the mandatory retirement age for an air traffic controller is only 56, compared to 65 for airline pilots.

After the presentation, we went to “the floor” and each plugged a headset into a station to watch the live action. I plugged into a low altitude sector covering parts of Colorado, Nebraska, and Kansas. We had only six targets in our 100 mile by 70 mile airspace, so Brian had lots of time for my questions. Rick’s controller was responsible for the non-approach portions of KDEN as well as the eastern departure and arrival routes, so he saw a lot more action with a dozen or more aircraft at a time. “Yet, he took his time to provide NOTAMs (unsolicited) to a GA pilot heading to Holyoke,” Rick said. Paul’s controller handled the high altitude sector around Four Corners. Paul reported, “He was handling a dozen planes, climbing, descending, and vectoring them to approach waypoints, seemingly without computer prompts from his screen, all the while typing quickly to annotate the targets for hand offs.”

The controllers work 8-10-hour shifts, and get breaks every two hours or so. The old “tiles” that used to hold paper flight strips are now vividly painted with each controller’s name, and are used to determine who gets the next break.  Paul, Rick, and I only plugged in for about 30 minutes, and that was exhausting! Our Denver Center controllers are an impressive group of people.

We have often been taught to “tell all” during our initial call to Center or Approach, such as, “Denver Approach, Gasburner 123AB 5 southeast of Northern Colorado Regional out of 6,200 climbing 7,500, request VFR traffic advisories to Pueblo.” We learned that the air traffic controllers prefer the more succinct “Denver Approach, Gasburner 123AB near Northern Colorado Regional, VFR request”. Here’s why.

An air traffic controller monitors multiple frequencies, multiple antennas on the same frequency, and multiple land line connections to other facilities. But they can only transmit on one antenna at a time. When we key up to talk in our aircraft, it’s possible that the controller is communicating with another aircraft on a different antenna, or coordinating a handoff on a land line, or debriefing another controller for a personnel swap at break time. The sky may appear silent to us, but it might not be for the person at the other end.

When we key the mic, the corresponding antenna location on the controller’s communication panel flickers, to notify them where the transmission is originating from. But if they miss that flicker due to workload, they have to transmit one antenna at a time to see if it’s the right one. Consequently, approximately where we are is important, but not exactly where we are (going for brevity over accuracy).

When the controller gets a request over the radio, they scan the screen with all the IFR tail numbers they are expecting to hear from. If you’re not on that list, they then guess that you’re a VFR request. We can be courteous by identifying as VFR in the initial call.

When the controller has the time to respond to your abbreviated request, they’ll have time to assign you a squawk code and get your particulars. They’re pretty good at scribbling stuff on a note pad while talking to somebody else, but all the same they prefer that our initial call be brief. So just tell them who you are, your closest landmark, and “VFR request”, and wait for them to acknowledge the conversation.

When I’m flying on VFR advisories, I often pull up a local AWOS to update my altimeter setting. I learned that if I’m on advisories (and most certainly when I’m on an IFR flight plan), I should use the altimeter setting assigned by ATC. One thing I hadn’t thought of is that if a controller has all the planes in their area on the same altimeter setting (even if it’s a bit different than the one being reported 3 miles away), they know the vertical separation between the aircraft. I’m going to stop tweaking my altimeter at every opportunity and stick with the assigned one.

We agree that all pilots need to take advantage of an Operation Raincheck tour. It’s a treat to see what goes on at the other end of our aviation lifeline.  Next time a Raincheck event shows up in your inbox, consider attending.