So recently I had the privilege to volunteer at the Women of Aviation Worldwide event here at FNL. The lines at times could be long, especially during the windy days, but I heard very few complaints if any. In fact Deb said she had gotten an email from one of the people on the north end complaining about the traffic. After they read the newspaper article they emailed back an apology and applauded what the airport was doing for these girls. Deb said this event turned a naysayer into a supporter.

She also stated that we were the only airport to run six days. They were originally scheduled for 7, but the wind raised it’s ugly head on Monday. Most only did one day.

So here are some of the final figures. There were a total of 28 pilots that participated. In all 1,714 girls received flights during the WOAW event. They flew 390 on Sunday alone as it was a perfect day with no wind. One of her favorite things was a 10 year old girl who wanted to fly but at the last minute wanted to back out due to her fear of heights. Deb told her to just look out the window and count the planes. Deb deliberately checked on her after the flight and the girl had the biggest grin on her face after her flight. 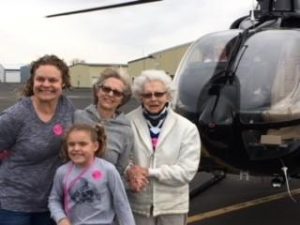 One of the most rewarding stories was a four generation group of women, the oldest was 96 years old and was an original Rosie the Riveter, that got to fly together.

There were girls who were anxious to take their first flight.  A couple were afraid of flying and hoped this would alleviate that. To a woman, teen, child, each one enjoyed their flight.

I even got in on the event with a ride in the helicopter. 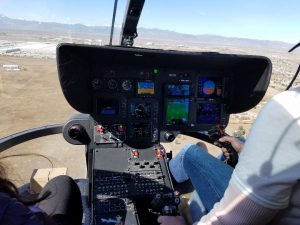 Each passenger got a medallion after they completed a short survey. A photo station was set up as well as props, including aviator hat, goggles and bombers jackets. You could tell the girls who were using “Snapchat” and “Instagram” to post their photos. There wasn’t a one I saw without a big smile on their face.

There were plenty of booths for the girls to visit after their flight. Some of those  were:

Colorado Division of Aeronautics as well as a flight simulator for girls to fly. David Ulane pulled double duty, taking advantage of the props as well as taking his turn flying the girls. 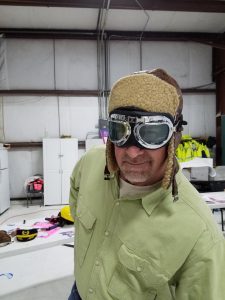 Reach Air medical helicopter on display to look at

The organizers did an AMAZING job keeping things on track and smiling through the entire event. I know they went home, dropped in a chair, and didn’t move for hours! 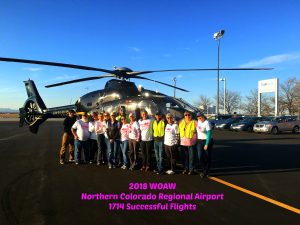