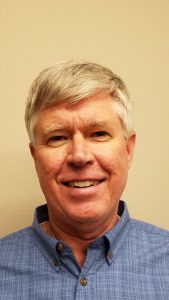 You might say flying is in his blood. He has a front page news article from 1966 showing his mom standing on the wing of their new Piper. The headline stated that she was the first female to get her pilots license in Sidney, Nebraska. In the article it stated that her most enthusiastic supporter was her 5 year old son Tracy.

A few years prior to that, Tracy’s dad bought into an Ercoupe and began taking flying lessons. Eventually earning his pilot’s license, he soon realized that the plane never left the ground without Tracy in it. The Ercoupe had a canvas bag behind the seat originally designed for luggage. They would put him in the canvas bag and away they went. Even though there were 5 children in the family, Tracy was the only one interested in flying.

The family moved to Sterling and at 16 Tracy began taking flying lessons. It took him till he was in college until he completed his course. Several factors played into that length of time. First he paid for the lessons himself. Second if his grades were not up to par, or he misbehaved, his parents would put his lessons on hold. Oddly enough, it was with Jack Taylor, who at the time was president of the local bank. He was a full time banker and flew as a sideline. Later, of course, Jack moved up here and started Colorado Contrails Aviation and got out of banking and started flying full time.

He returned to Sidney, Nebraska where he attended an A & P mechanics school. After he got his rating he moved to southern California and worked in aviation where he overhauled engines for a short time and realized two things. First, Orange county was expensive. Second, if you make your living in your hobby, you’ve lost your hobby.

Since he had a job opportunity in Sterling helping his father run a concrete block plant he moved back and wound up completely out of aviation. After his father retired and sold his business he was able to buy a car dealership. He kept that for sixteen years.

While in Sterling, he was able to buy into a partnership with two different Beechcraft Bonanza’s. Then an opportunity came up where he could buy into a half of a Boeing Stearman. His friend bought a freshly restored Stearman in perfect condition. It was, as Tracy is fond of saying, the nicest one in the world at the time. He would fly with his friend and go to airshows and Tracy fell in love with it. His friend wanted to buy a T-6 but Tracy found a T-28 which his friend bought, much to the consternation of his wife. Tracy was then able to buy half of the Stearman to help ease the tension his friend was facing at home! He would have liked to have bought it completely outright but he had twin newborn boys. Eventually he would like to buy out the other partner and find hanger space here.

He and his wife had always talked about moving closer to the front range so when an opportunity came along where he could sell the land his car dealership was on, they made the move. They rented a house in Loveland as a good base to take their time and find the right small town. Since both he and his wife were from a small town they wanted that for their kids. They looked at Windsor, Berthoud, and Johnstown.

The house they rented in Loveland had a COLT bus stop in front of it. They bought their kids bus passes and cell phones. They could go to the movies, or take swimming lessons at the Chilson, all the while having the ability to call home if needed.

About six months into their search they began to feel like Loveland was home. They also realized there was more opportunity for middle age kids to have something to do, rather than just a park in a smaller town. So they began looking in Loveland and eventually bought a house here.

He remains an independent buyer for the car dealerships.