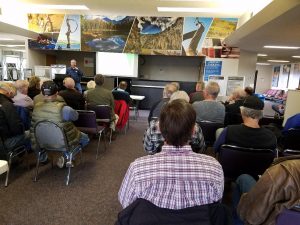 The annual meeting was held January 20th, 2018 at the Northern Colorado Regional airport terminal where Steve went over the vision statement, listed the agenda and stated that since Larry Wilson was retiring as secretary, the association would have to elect a new one.

⦁ Most of our income comes from dues.
⦁ BBQ that EAA went in with us on that so part of the income was from them.
⦁ We have our server for the website that costs us $210.00 a year.
⦁ Every year we have to file with the state of Colorado for $10.00.
⦁ PayPal fees are out of 109 members, 101 renewed by PayPal. For every $10.00 renewal through PayPal they take .59 cents.
⦁ Food is the main expense. We have had a BBQ, Christmas party and of course the sandwiches for the monthly meetings.

There are 4 mission statements.
1. Attend public meetings and offer our support and expertise. We go to the airport commission meetings, Colorado Aeronautical meetings, and Colorado Aviation Business Association meetings which Malachi is involved with.
⦁ This past year HR Bill 2997 came out where Senator Schuster is trying to privatize air traffic control.
⦁ Jason Licon found something in the Continuing Resolution that applied to FNL which is where the 1 million dollars for the the seal coating came from.
⦁ Steve will continue to let everyone know when the Airport Commission meetings will be held.

2. Community Input where others can communicate with the pilot community.
⦁ We’ve had Collings Foundation ask us for volunteers.
⦁ David Ulane has come in and talked about the remote tower.
⦁ CABA has been pretty involved with this Metro Plex airspace redesign.
⦁ Promote education for pilots and general meetings every month. They have started an IMC club which reviews IRC.
⦁ We put education articles in news letter.
⦁ We had Angel Flight come in and talk to us last year for one of our Pilot Refresher programs.

3. Education for General Aviation and the public.
⦁ The fourth Thursday of every month there is a pilots refresher course.
⦁ They started an IMC club that talks about various IMC procedures which has it’s meetings the 3rd Wednesday of every month which is co-sponsored with EAA 515.
⦁ We now have a page on website for safety pilots and CFI’s.
⦁ We sponsored a meeting on what to use for call letters for the airport. Agreed on NOCO traffic.

4. Election
⦁ Newsletter editor Jeneal volunteered to be our secretary, so she was added to our slate of officers up for election.
⦁ Our board is a staggered 3 year term. This year Malachi O’Neill is up for election and he would like to continue to serve. Deb Montgomery will be up next year and Jason Kopp will be up in 2020.

⦁ Remote tower progress.
⦁ The new airport name possibly February 1st.
⦁ Advocate against privatizing.
⦁ Monitoring metro airspace progress.
⦁ Advocating for the crosswind runway.
⦁ We will continue to to maintain and improve the association website. Steve gave a nice walk though of some of the features of the new site.
⦁ You have to be a member to post in the classified section.

⦁ Name change, should be official Feb 1st of this year and stated that this group and others came up with a common name that everyone agreed on and that was NoCo Traffic. It has support of the airport also.
⦁ Regarding the remote tower timeline is about March/April before shovels start hitting the dirt. The tower will go just on the other side of the modular building. Right now the controllers will be in the modular and the hope is after it’s certified they will find a better location for them.
⦁ Installation of the controller work stations will be set up in the modular with a video wall with the system fully installed by August. There will be a 2 year testing process. 1st phase will be turning it on, phase 2 will be ATC providing advising services to pilots, phase 3 will be class D airspace traffic control.
⦁ August will have the FAA approved site acceptance. Then it will begin data collection between August and October of this year they will be looking for – in data collections – this will make sure they have all the cameras positioned correctly, then April-ish of 2019 ATC will act as a tower but will not be certified until June 2020 until it is fully certified. There might be an opportunity for people to volunteer to test certain scenarios.
⦁ Jason showed a video that explained the set points that they can activate the distance markers.
⦁ There are 2 new hangars at the end of Stearman that have been built and there are 3 more that are in the process of being built. These hangars are being built by KFNL Hangars LLC and are just under 5,000 square feet.
⦁ Winter Ops – safety is number 1 so they try to make sure they issue NODAMS and Traycon is updated about vehicles on the runway.
⦁ Events – March 5-11th is Women in Aviation week.
⦁ Collings Foundation will return in July.
⦁ Jason introduced Gina Gonzales an ARFF Engineer, who is our firefighter assigned to the airport. She showed off the new fire truck and answered questions from the members.