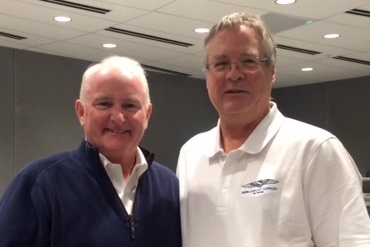 I had two days of meetings at AOPA headquarters on December 14-15 as a member of the reconstituted ASN Board of Advisors. AOPA has moved far enough along on President Mark Baker’s Things To Do list to show some much needed love to this volunteer program.

I’m the Airport Support Network volunteer for our airport. I got a call from our Regional Manager Warren Hendrickson last month asking if I’d be willing to represent WA, OR, ID, MT, WY, UT, and CO on the new Board, and I accepted.

Originally, the ASN volunteers reported to a staff person at AOPA headquarters. This person got emails from all over the country, and spent her entire day filtering them out and figuring out who needed to know what, and what was inconsequential. She didn’t have time to respond to our emails, so volunteers felt we were feeding a black void.

The new structure of the Airport Support Network is to have each region’s ASN volunteers report to their respective Regional Manager. The managers have a weekly phone conference where they keep in sync as to what is going on around the country. They primarily deal with state legislative issues, but caring for the airports in their regions is also a natural fit.

In our short time together in Frederick, the Board members got to know each other, heard about what’s going on in AOPA right now, and started defining what will make the ASN program better. We will be meeting officially every quarter by phone conference, and annually in person. Informally, the Board and Regional Managers are linked up by email.

I found out a lot about what’s going on at AOPA during that two-day trip. We received presentations about several programs going on.

There’s been a lot of emphasis at AOPA since Mark Baker came on board about growing the pilot population. Mark told us that over the last five years, the average age of the active pilot population has moved from 55 years old to 60 years old. The population is aging a year per year.

You’ve probably heard about the Rusty Pilots seminars AOPA has been hosting around the country. We’re planning to host one at FNL this Spring. The program has been quite successful. 7,500 people attended the seminars this year. AOPA follows up on attendees’ progress; since the program started, over 4,600 lapsed pilots have completed their flight reviews and are flying again.

At the young end of the spectrum, AOPA is developing the You Can Fly program, a high school STEM curriculum about aviation. The 9th grade curriculum has been completed and is in its second year, deployed in 29 high schools in 17 states. The 10th grade curriculum is currently under development. Eventually they’ll cover all four years of high school.

You Can Fly is being offered to high schools at no cost. The entire program is being funded by a few deep-pocket members of AOPA. In addition to the curriculum, they have an on-site training facility (the ASN Board met in the auditorium there, which was just dedicated the Friday before we arrived) and a distance learning center. I’m really excited about this program!

AOPA has taken note that the flight school experience encountered by flight students around the country isn’t always the best. They’re working on materials for flight schools such as adaptive learning modules (a student takes a progress test which is graded by the instructor, and based on the results the next module is custom-built for that student to shore up the areas of weakness). The entrance to the You Can Fly building (which is in the old Avemco building next to AOPA HQ) is decked out like a flight school should look — nice furniture, a reception desk where the receptionist greets you by name and knows how you like your coffee, a merchandise wall and television screen. And a very cool light fixture of six LED light bars around a prop spinner. AOPA plans to bring flight school administrators in and teach them how to run a more successful school.

Dinner on Thursday night was memorable. There were seventeen people including Mark Baker. Mark regaled us with story after story for a couple hours. He even shared some not-for-publishing behind the scenes looks at his endeavors with Congress and the FAA. I’m continually amazed that this Association President with international visibility is just one of us. He’s doing what he’s doing because he’s passionate about flying.

Life as a Corporate Pilot
Are you Santa?