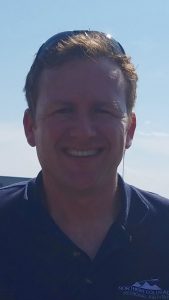 Sean grew up in Des Moines, WA near Sea-Tac airport in a house built by his paternal grand-father and great grandfather. His love for aviation came naturally. His grandfather was a mechanic for Northwest Orient for nearly 40 years. He remembers visits to the Northwest hangar and having his grandfather’s passion for aviation passed along to him at an early age.

His father was a private pilot, and although he gave it up before Sean was born, he was happy to support and encourage his son’s love of aviation. His dad was in the Navy so Sean grew up spending a lot of time flying around on Military Airlift Command (MAC) flights on C-141, C-130 and C-5’s. “When you’re doing that as a kid, it’s a lot of fun.” he said.

He has always wanted to be a pilot. It’s kind of a “bucket list” thing for him. He took lessons as a kid, funding them with his paper route money. Once he got out of high school and started moving on, there was no money left for lessons.

After graduating with a degree from Boston College in Political Science, he took a year off. During that time he and a friend went to Flagstaff, AZ to train for an Ironman Competition. Figuring it would be a once in a lifetime event he chose Roth, Germany for the competition (the location of Ironman Europe at the time). To his complete amazement, he completed the event — with support from his Dad on the sidelines — even doing another one in Canada.

Moving back to Seattle he took a job with an engineering firm as a marketing coordinator. Eventually he went back to school to get a graduate degree in planning at the University of Washington. It was in the Masters Program that he met his future wife, Tessa. Tessa and he met through a mutual friend on a bike ride to a local brewery. They spent a few years as good friends before dating, eventually becoming engaged and finally getting married in 2012.

She is actually the reason they moved to Colorado. A transportation planner, she applied for a position with the city of Fort Collins as the manager of the City’s bike program. They talked about the fact if she got the job they would be moving to Colorado. Being that there were around 100 other applicants it seemed like the chances were few that it would actually happen. When she actually got the job, Sean briefly left his company in Seattle before getting re-hired under an arrangement that allowed him to telecommute from their new home in Fort Collins.

He did that for about 3 1/2 years, and as much as he loved the opportunity to fly back and forth, working out of a home office was beginning to wear on him.

It crossed his mind that if an opening ever came up for his set of skills at FNL, he would love to work there.

In Seattle he was a project manager and planner for a commercial architectural firm where most of his work was related to early planning and feasibility for development projects. On a typical project he was primarily involved at the conceptual stage and worked with the owner to come up with various scenarios for development concepts. When it came time for the buildings to be designed, the project would be handed off to the architects who would go forward with the details of building design.

So with his background as a development planner as well as several years in marketing and business development, when he saw a job with FNL posted in the AAAE listings, he thought it would be a great opportunity. He now works alongside Jason Licon with a focus on planning and attracting development to the nearly 300 acres of developable land on the airport to help create a sustainable revenue stream and to encourage private investment. He also works closely with the City of Loveland to help guide compatible development around the airport. Other key duties include playing a supporting role in efforts to bring scheduled air service back to FNL, and working on various outreach and communication initiatives to help raise the profile of the airport in the community.

He and Tessa live in Fort Collins. When they’re not working on their house, they enjoy getting outside and spending time on the trails with their 2 year old lab, Ryder.